Periodontal Therapy in Scarborough, ON

Three out of four adults have some form of periodontal disease, which is also known as gum disease. The severity can range from slight gum inflammation to a serious case that causes major damage to the bone and soft issue that support the teeth. In the most severe cases, this lack of supporting soft tissue and bone can result in tooth loss.

When the bacteria in our mouths combines with mucus and other particles, it forms a colourless plaque on teeth. If this is not removed efficiently, the plaque will harden and become tartar, which can only be removed by a dental professional.

It is this bacteria and tartar that causes gums to become inflamed, which is referred to as “gingivitis”. This makes gums highly irritated and they become swollen, red and able to bleed easily. With a regular dental appointment, these irritants can be cleaned and ensure your mouth is kept healthy, preventing further escalation of disease and good hygiene.

However, if a case of gingivitis is ignored, it then leads to periodontitis. Periodontitis causes the gums to “pull” away from the surrounding teeth. This results in pockets that can become infected, and over time cause the gums, tissue and bones that support the teeth to deteriorate. This can result in teeth becoming loose and potentially have to be removed.

Gum disease is often painless, which makes it very easy to ignore until teeth start to loosen. It is most common that gum disease develops when plaque builds up under or along the gum line. 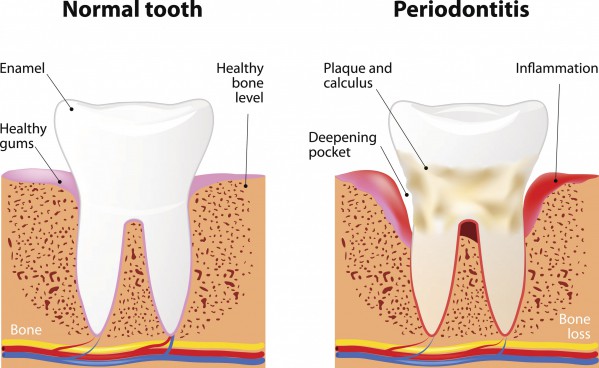 Regular dental appointments are the most effective way to catch and treat the early stages of gum disease and minimize the progress of any other oral disease.

For more information on periodontal gum therapy, please contact us at Dr. Shirley Salazar Dentistry. We serve both Scarborough and Toronto, Ontario.